The Guardian: Natural Born Killers at 25 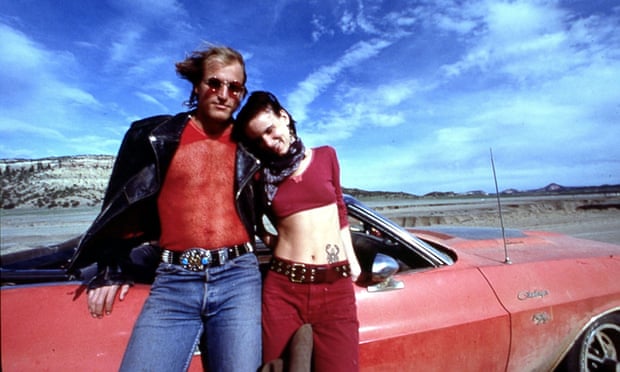 Natural Born Killers came to theaters on 26 August 1994, only a few short months after OJ Simpson’s infamous flight from justice in a white Ford Bronco in June. At the time, director/co-writer Oliver Stone could not have anticipated the scale of the spectacle that the scandal would mutate into, a 24-hour news orgy of speculation and generally ghoulish exploitation of the public’s morbid fascination with carnage. The trial wouldn’t even begin in earnest until January of the next year, and yet there’s the Juice, stuffed in the final moments of Stone’s blood-spattered road movie. His hangdog visage flashes past the screen in the whirlwind montage of shocking images that close out the film, a canny symbol for the toxic symbiosis between America’s epidemic of murder and the culture of TV press feeding on it which Stone rails against. Simpson appears only for a split-second as an unwitting warning – the ghost of media circuses yet to come.

The Simpson trial and the feeding frenzy of coverage surrounding it would later exemplify the sociological feedback loop that had already formed the target of Stone’s furiously delivered critiques. Natural Born Killers, now observing the 25th anniversary of its original release, took a vampiric news-industrial complex to task for the irresponsible manner in which it covered the day’s most heinous crimes. Though outlaws Mickey (Woody Harrelson) and Mallory (Juliette Lewis) rape and torture and kill with wanton abandon, the truest villain of the film may be Wayne Gale (Robert Downey Jr), an unscrupulous yellow journalist and host of the shamelessly lurid true-crime program American Maniacs. He glorifies their exploits for an audience all too eager to eat up the reckless sensationalism he peddles, which in turn motivates Mickey and Mallory to continue one-upping their own slaughters. Violence begets fame, which begets violence, which begets fame, and on and on.

America is a sick place, Stone suggests, with maniacs like Mickey and Mallory as the symptom of illness. And the perverse affliction of homicidal celebrity hasn’t gone away in the quarter-century since Stone mounted his demented satire. The phenomenon of mass shootings, a frightening new concept when the “trenchcoat mafia” at Columbine first sparked an ongoing debate in 1999, is now common enough that we can’t keep track of them all. We’ve fully given up on the “don’t print the killer’s name” principle; Rolling Stone devoted the July 2013 cover to a Jim Morrison-esque portrait of Boston bombing culprit Dzhokhar Tsarnaev, and caused an outcry echoing Stone’s sentiments from a couple decades earlier. On paper, his vision should seem more prescient now than ever.

In practice, however, his theories – from his Freud-adjacent analysis of his characters’ dysfunctions to his portrayal of the media as the big bad boogeyman – feel simplistic and passé. The progressive party line on sprees like Mickey and Mallory’s has shifted to the point where blaming headlines or TV cameras now registers as nothing but evasive, in the same way that gunplay video games have become little more than a deflective talking point.

Stone’s methods, which privilege style and cinematic effect over nuance of ideology, flatten the commentary even further by vilifying the media as a whole. In portraying Mallory’s flashbacks to her horrifically abusive home life (complete with a vicious rapist father played by a going-against-type Rodney Dangerfield) in the style of an I Love Lucy episode, Stone mocks the artifice of the sitcom and its mandated happy endings every half-hour. He posits that the American family was sold a false bill of goods by pop culture, and the inability to attain that shiny happy standard has irrevocably warped their minds. But as diagnoses of national ails go, “TV lied to us” has a blinkered awareness of the bigger picture that entrenches the charge in the cynicism-friendly 90s.

Mickey and Mallory’s visit to a Navajo shaman named Red Cloud while wandering under the influence of psilocybin mushrooms does a lot to clarify Stone’s objections to modernity, and the flaws hardwired into them. The film-maker introduces Warren Red Cloud as a foil to just about every defining aspect of Mickey and Mallory’s world: he’s steeped in spirituality where everyone else commits to the crassness of industry, he’s selfless and decent where others have been greedy and malevolent, he’s coded as authentic where everything else is slathered in bullshit. Stone eagerly falls into every pitfall associated with white understanding of native culture, imagining these human beings as conduits between the mortal and supernatural worlds, somehow purer than their Caucasian peers.

He paints with a brush just as broad when turning his attentions away from the desert outskirts and back toward the mainstream of civilization, where he’s unable or unwilling to consider the complexities of the complicated subject he’s chosen. Stone erects a protective barrier of caricature around his technique, as if to leave himself the out of claiming that it’s all in jest when inevitably faced with criticism. Downey Jr delivers a parody of an oily tragedy hound, just as Tommy Lee Jones puts a cartoonish spin on an archetypal cop as the sputtering, apoplectic warden hot on our antiheroes’ trail. Stone prefers the outline of characters to actual characters, and that goes double for his ideas.

With every public bloodbath, discourse inches closer to accepting their root cause as a combination of lax gun laws and an undercurrent of psychosis endemic to those feeling marginalized from society. Stone’s inquest may have been a shock to the system at the time, but his tracing of that psychosis back to the evils of television scans as borderline reactionary to present-day sensibilities. This is not the expected lack of enlightenment that’s par for the past’s course, either, but rather an intellectually faulty approach by any era’s standards. Simpson didn’t (maybe, that is) kill Nicole Brown Simpson to get famous, and ignoring his trial wouldn’t have prevented similar incidents in the future. The matter runs deeper into America’s ugly snarling id than Stone estimated, beyond moving pictures. Perhaps he only saw the deleterious influence of media as the problem because he’d eventually make himself, with the many copycat killings inspired by the movie, part of it.

Re: Natural Born Killers At 25

Yeah, I think it boils down to the "Abused as a child, executed as an adult" thing - and it seems whiny to a lot of conservatives - but it's very true in many, maybe most instances. However, what can really be done about it? I mean, law enforcement has to be tough - to enforce the law. Any instance of softness is just asking it. Anyway, though, as portrayed in the prison scene, despite the toughness, law enforcement has embraced the fact of "victimization" when dealing with criminals - to some degree.

Do you all think that people generally ignore victimization - and instead judge people? For instance, are people quick to call people murderers, whores, monsters, lazy - whatever the insult?

Return to “Media and Entertainment Zone”